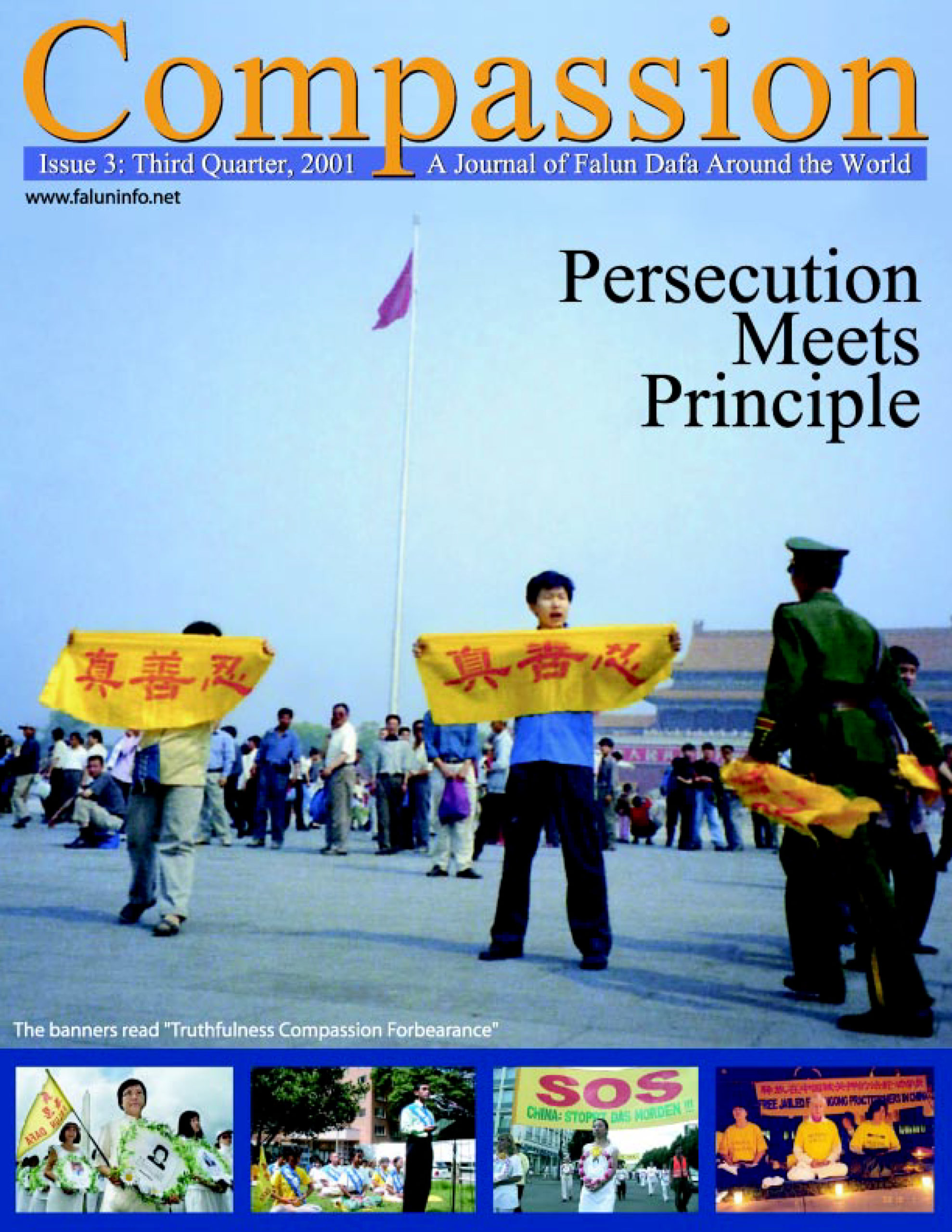 Resilience and Resourcefulness: A Matter of Principle

For more than two years, the full weight of China’s ruling regime’s public security and propaganda apparatuses has pushed down on Falun Gong practitioners with the intention of crushing their practice and breaking their wills. Beginning in the middle of the night on July 20, 1999 by rousting out of bed and arresting what the regime deemed to be key leaders, they hoped to make quick work of this crushing action. Knowing how peaceful and non-violent the practitioners were, they assumed any resistance would quickly evaporate once such high pressure was applied.

As detailed in this issue’s article “Why Persecute Falun Gong?” Jiang Zemin and his allies plotted to use this action against Falun Gong as a means to seize and consolidate power within the government. But they
misunderstood the very nature of Falun Gong practice, which lead them to believe it would be easy to eradicate. From their understanding of history and communist theory, they believed Falun Gong to constitute a social movement, a very popular and rapidly growing social movement. This was the first error in judgement, because Falun Gong is not a social movement, but an individual practice.

From their experience in dealing with social movements, they thought they had a formula for dispatching Falun Gong: imprison the leaders, declare all activities illegal, economically and socially penalize violators and their families, saturate the publicís minds with vicious propaganda, and physically and mentally torture the uncooperative ones.

Unlike followers of social movements, Falun Gong practitioners do not give their hearts to charismatic leaders or pursue external rewards or goals. Instead, Falun Gong practitioners hold a deep, abiding, and unshakable personal commitment to the principles of Truthfulness – Compassion – Forbearance. Each practitioner, one by one, comes to an understanding of these principles, and their actions spring from their individual understanding. This is the source of the limitless endurance of the practice in China.

Two years after beginning what they thought would be a short campaign, Jiang Zemin and his allies grow increasingly frustrated and desperate. They have publicly acknowledged the cruel, systematic, multi-pronged methods for torturing and brainwashing practitioners in custody. They loudly proclaim imminent victory even as the hearts and minds of people inside and outside China become more clear about what Falun Gong represents and how vicious the Chinese government’s campaign is.

Practitioners continue to confound the persecutors, as they actively resist without retaliating. They withstand brutal treatment in custody and still have kind words for the torturers. While fewer openly go to Tiananmen Square (see Courage on Tiananmen Square) to appeal peacefully, more hang banners, post signs, and install loudspeakers in public that broadcast the truth and goodness of Falun Gong. They hand out leaflets and talk to strangers in cities and in the countryside.

Even those who, under duress, sign statements of renunciation in custody immediately regret it as soon as theyíre released; they go back to being practitioners, more dedicated than ever. The silent majority of practitioners in China persist in their beliefs, and the louder and more desperately the government blares its propaganda at home and abroad, the more clear-headed people can see who it is that truly exemplifies the best of Chinese culture. The regime in China attempts to poison minds; Falun Gong practitioners provide the antidote of truth.

Falun Gong practitioners outside China provide moral support and play a large part in clarifying what Falun Gong is, and what vicious actions the regime takes. In large public events, such as solemn parades and candlelight vigils, and in quiet heart-to-heart talks, practitioners in Hong Kong, Canada, Australia, Sweden, and dozens of other nations shine a clear and bright light on the situation in China.

In this issue you will read the amazing story of Yongjian Tan, whose resourcefulness and resilience took him thousands of miles from the labor camp where he had been burned by guards with a heated metal rod. We also bring you the stories of Kunlun Zhang and Amy Lee. These stories are but a few of the millions of stories in China that personify the resilience of Falun Gong practitioners committed to their beliefs