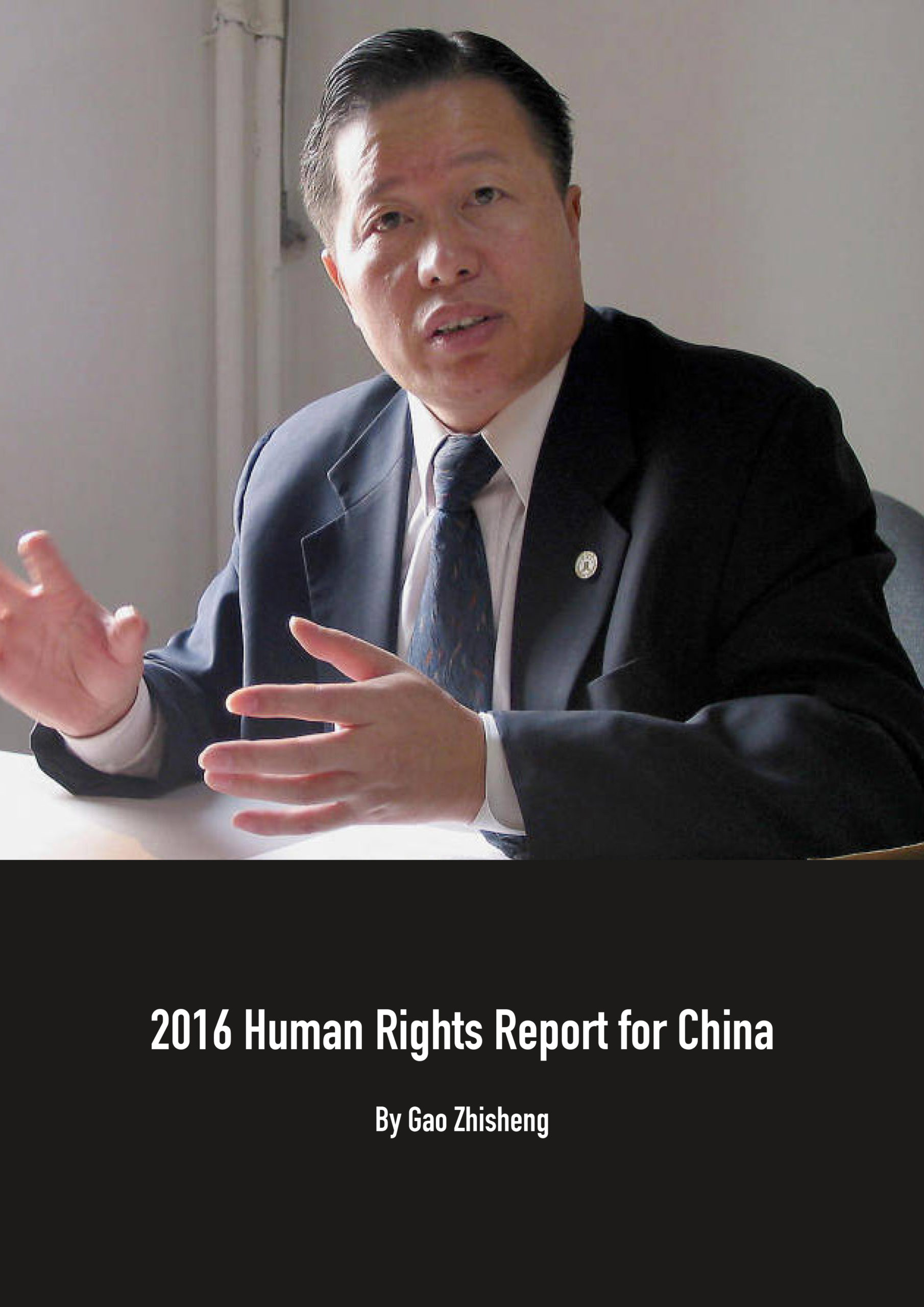 While immersed in drafting a Constitution for China, I set aside some time to write a report on China’s human rights in 2016, only to find that this project is constrained to a great extent by the ‘Chinese characteristics’ of my current situation: blockage of my social media accounts whenever I attempt to use them, and no freedom to communicate with the outside world. Not long ago, the authorities said to my family, “President Xi Jinping is minding some troublesome business now and once he gets that done, he will have time to deal with Gao. Gao has caused some big trouble.” (By that, they referred to the Constitution I’m drafting for China.) Therefore, I don’t know how much time I will have to write this report. This report is based on information disclosed to me by a petitioner in dark nights and the information is colored by the petitioner’s mindset, knowledgebase, discernment and various other factors, and hence may not be thorough and precise. Due to time constraints and my inadequacy, I apologize that this report may appear more like a list of human rights violations than a report.

In today’s society, it is absurd to think that we should even be discussing whether human rights should be rejected, and yet this is the dark reality we Chinese people have to face year after year! In China, discussing human rights openly has become taboo and has been suppressed by the government as an extremely terrifying threat with even more terrifying measures. Anyone with normal human emotions can testify that China is governed by an inhumane government. It is not difficult to imagine the brutality of this type of government and the indisputable damage it causes to the future and reputation of human civilization.

Humanity has the innate ability to discover and understand issues, which is not only a part of human rights, but also a prerequisite for society and civilization to advance and perfect itself. This ought to be basic common sense for all humanity and yet again, China is excluded from the universal common sense.

Apparently, people outside China have also underestimated the significance of the human rights disasters inflicted on the 1.3 billion Chinese people by the totalitarian communist regime in China.

The cruel reality of extreme hostility to human rights has made documenting human rights in China the most dangerous cause in the world. Some time ago, the Vice Chancellor of Germany made a declaration about the forced disappearance of Chinese human rights lawyers. However, he emphasized that his supportive stance was personal and not representative of his government or country, clearly indicating that he understood all too well that mainstream western political values represented by his role are not agreeable to human rights, human morality and basic human values regarding justice. In spite of that, his rare and exceptional courage made him stand out among western politicians. The absurdity of the current situation has made it clear that the Communist Party of China (CPC) has successfully terrorized and deterred the whole world with the enormous economic interests generated by the blood, sweat and labor of the poor people in China. Furthermore, the whole world has learned to be deaf and mute to CPC’s ruthless suppression of the Chinese people’s basic human rights in exchange for the bloodstained economic interests rewarded by CPC. The brutal oppressors of human rights, the oppressed, and the brutal division of interests by all nations around the globe have created an infamous status quo, seen and known by people everywhere, which also attests to and solidifies the unfathomably lonely and dangerous situation of the Party’s protesters in China. We as China’s human rights pioneers, who are called to carry the yoke, have no escape from the lonely and dangerous situation of which we are fully aware.

Undoubtedly, CPC is the primary perpetrator of the human rights disaster in China. However, we cannot ignore in this report the essential role western politicians have played in contributing to this disaster. In fact, what makes their role unforgivable is that they know better than any human group that communism is so far the most evil and cruel power in human history. They also know that today’s China is the killing field and execution machinery of our inalienable, inherent, God-given human rights. Nevertheless, they allow economic interests to dictate their choices and the butchers get what they desire, i.e. cordial validations, spectacular support and enthusiastic acclaims. People victimized by the human rights disaster have a sober understanding of the reality and that sober understanding has determined the rationality, objectivity and impartiality of my accusations and accounts in this report.

The year 2016 witnessed the harshest and most brutal political oppression since the end of Mao Zedong’s rule, which surpassed even the darkest political rule ever experienced by humanity, the ‘June 4th Tian’anmen Square Massacre’, and the suppression of Falun Gong. A characteristic and pattern that everyone can see in 2016 is the comprehensive and rapid return of a ‘Mao-style terror and control. CPC’s forceful and brutal control of social groups and citizen’s personal rights reached a historic high of the past 38 years. In 2016, the whole world witnessed the Xi Jinping administration’s opposition of universal human values on all fronts. CPC’s ubiquitous and formidable security force put up fights against humanity’s natural feelings about religious belief, freedom, compassion, love and justice; against humanity’s rights of property, residence, and free migration; against lawyers, journalists, human rights activists, environmentalists, labor rights defenders and petitioners;1 against democracy and constitutionalism, judicial independence and freedom of speech; against achievements of human civilization, etc. The absurdity and significance of these anti-civilization actions have far exceeded existing experiences and records, and are truly astonishing. This report can only give you a glimpse of the full picture.