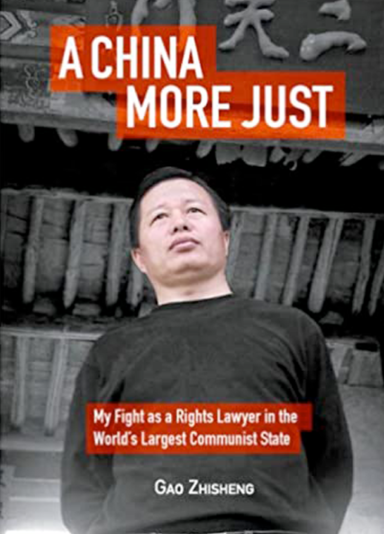 More in Crimes by the Chinese Communist Party:

A China More Just: My Fight As a Rights Lawyer in the World’s Largest Communist State

Attorney. Activist. Fearless. Faithful. The story of one man who has taken on the world’s largest authoritarian regime… And, in the eyes of many, won.

Mr. Gao… is one of the most well-known dissidents in China. An outspoken government critic… he has taken on cases that many Chinese lawyers would not dare touch.

Born and raised in a cave with only the stars to tell time, Gao Zhisheng rose from poverty to become China’s most important lawyer. He has courageously sought justice for vulnerable groups such as the poor, the disabled, and the persecuted. Yet Gao’s fortitude has drawn the ire of Communist authorities. Today, physical threat and police surveillance are a constant reality for both Gao and his family. Undeterred, he has responded in the nonviolent tradition of Gandhi by launching nationwide hunger strikes to intensify the call for justice and human rights in China. His undaunted resolve and generous spirit have won the hearts of millions. Whispers can be heard in China’s streets, Will Gao Zhisheng become the next president?

Gao Zhisheng rose from utter poverty to become one of China s most acclaimed lawyers and a leading advocate for the oppressed. Life took a most unlikely turn in 1991 when Gao happened to learn, while selling vegetables by the roadside, that the country was looking to train new lawyers. Though possessed only a middle-school education, Gao taught himself law and passed the national bar examination in 1995.
Gao made headlines in 1999 by winning the largest medical malpractice lawsuit in Chinese history. In 2001, China’s Ministry of Justice named him one of the nation’s top-ten attorneys. A Christian, Gao has since become known for his tenacious pursuit of justice on behalf of China’s most vulnerable from exploited coal miners to democracy advocates, the poor, and victims of religious persecution.

In 2005 Gao wrote a series of open letters to China s authorities detailing his investigation into the torture of members of the Falun Gong. Thereafter he found himself besieged, as he put it, by infuriated Party rulers. Gao’s Beijing law firm was soon after shut down, his family put under surveillance, and attempts made on his life. In 2006 he initiated a series of hunger strikes that involved thousands worldwide.

Gao’s maltreatment by the Chinese regime has been the subject of formal resolutions by the United States Congress and the European Parliament. Rights groups such as Amnesty International have campaigned to ensure his welfare. He has been featured by The New York Times, Washington Post, The Guardian and many other prominent media.

In 2006 Gao became the recipient of the Chinese Liberal Culture Movement’s Special Human Rights Award, the Asia-Pacific Human Rights Foundation’s Human Rights Champion Award, and in 2007 was awarded the American Board of Trial Advocates Courageous Advocacy Award. He is a Nobel Peace Prize nominee.